At Yellow Spark, we believe people make businesses successful. But people, are becoming hard to retain, and this was a feeling echoed across organisations we consulted.

It is safe to say that the days when employees stayed in the same job for most of their lives, is long over. What we see today are quick turnarounds of people, actively moving toward better opportunity and quicker growth, especially if they feel a cultural dissonance with the organisation.

When the people of an organisation keep moving out, it’s time to worry… because without stability, seldom will organisations see steady long-term growth. Hence, we wanted to help organisations retain their employees and ensure at least certain levels of job satisfaction.

We decided to address this issue and came up with a survey to understand what exactly it was that the employees were feeling; what is preventing them from being as productive…consequently hampering the growth of the organisation.

This prompted us to design an index called the ‘Organisational Success Quotient’ to help organisations predict their success based on what goes on in their workplace. The index constitutes of 10 intangible aspects of working in an organisation.

Our sample set represented a cross-section of companies ranging from those with turnover more than 100 Crores to those under 10 Crores; some companies were under 10 years while some were older… In terms of industries, IT & ITES, media and entertainment, and banking constituted almost 50% of the respondents.

Moreover, the survey represented diverse voices within the organisation, like top management, women leaders, and even junior level employees.

After reaching a sample size of 100+ responses, we are now ready to share our findings on the key challenges organisations in India face today… Successfully overcoming these obstacle areas may just help them rocket to a whole new level of success!

Let’s look at the top 3 secrets:

One: Employees don’t leave organisations but leave each other.

Our data found that the reasons employees part from organisations are essentially because they feel the organisation lacks a sense of fairness, and lacks an enabling environment…both eventually resulting in employee dissatisfaction.

The research further showed a clear disconnect between the perceptions of managers and employees in this regard. For instance, 33% of managers strongly agreed that their organisation exhibits a sense of fairness, while less than half (14%) employees thought the same. This disconnect is probably the primary cause for lower level of employee retention in an organisation.

It is thus natural that if the perceived sense of fairness is low, employees will not be happy and job satisfaction will also be low. But apart from the obvious, these findings also show that processes in such organisations are either not well defined or not adhered to. For example, managers may have certain discretionary powers that are perceived as unfair.

Management needs to put a feedback mechanism in place to know what employees are feeling. Deploy all channels for employee feedback, including appraisals, grievances mechanisms, exit interviews and treat all employee feedback seriously to take on the challenge of retention and address it head-on.

Two: Our data showed that women and men clearly have different perceptions of the workplace. 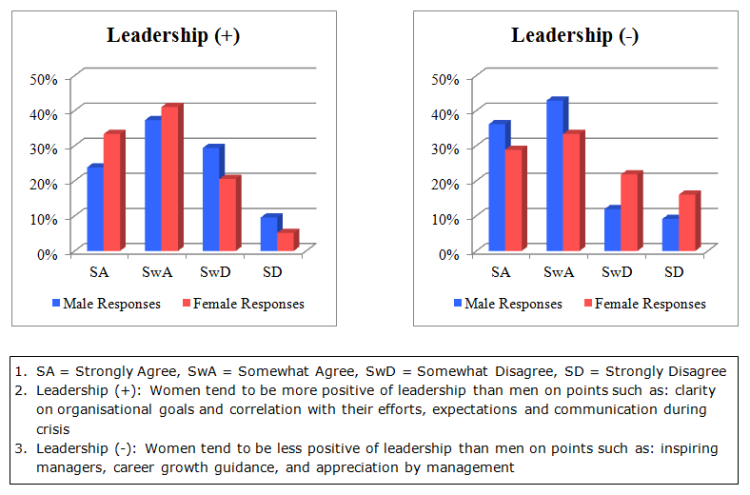 Gender is a complex issue within the workplace. The perception of Gender discrimination is more than having a heathy number of women in the workplace, or celebrating women’s day, or defining a sexual harassment policy.

It is more about women employees being treated at par, by allowing them to take decisions independently, rewarding their efforts, and giving them the freedom to use their understanding of the big picture to aid organisational growth.

Data revealed that young organisations exhibit few qualities like transparency, learning mindset, and considerate towards employees little more than older organisations. What is striking is that these qualities and a few more like instant gratification, tech savvy, and respect for work rather than age or authority…, all better appreciated by millennials.

Millennials – as also seen in this survey – are equally distributed across the two types of organisations. But, probably, younger organisations are changing with the times faster.

Are you an organisation that wants to listen to the ‘voice of employee’? Involving a third party might just be useful…one who not only ensures confidentiality and fairness, draws unique insights from the data, but also helps in change management and culture development. If so, reach out to us on: contact@yellowspark.in

About the research: At Yellow Spark, we believe people make businesses successful! Yellow Spark Solutions LLP designed and initiated this survey to gain insights on what really matters to employees at their workplace.

The Wildlife Conservation Trust (WCT) first began working with Yellow Spark when we were looking to bring on a new external expert for our internal committee as stipulated under the Prevention of Sexual Harassment at the Workplace Act, 2013. As an organization that is still growing, both in terms of workforce and reach, we have always strived to ensure that our HR policies are up-to-date and truly reflect our inclusive and bias-free philosophy. The team at Yellow Spark invested time and energy to understand our ethos and working structure in-depth. They helped us audit and update our POSH policy. They also designed and executed training on the POSH policy for all our employees, ensuring that the intricacies of the Act were well understood by everybody, irrespective of the language barrier …

‘As we were slowly inching out of the pandemic-induced HR challenges, we were looking for an organisation-wide capacity building on the PoSH Act. Yellow Spark wrote to us and we jumped at the chance to work with them again. Aparna and Deepam brought their understanding of non-profit HR to tailor the sessions to the contexts of our team members. The module was comprehensive and accessible, and their facilitation was excellent. They encouraged participation, addressed all questions with ease, and demonstrated a deep understanding of legal and sensitive aspects of the issue along with a real commitment to improving YUVA’s internal capacities and response. Yellow Spark is extremely accessible and doesn’t come with a cookie-cutter approach for all organisations. This makes their input both uniq…